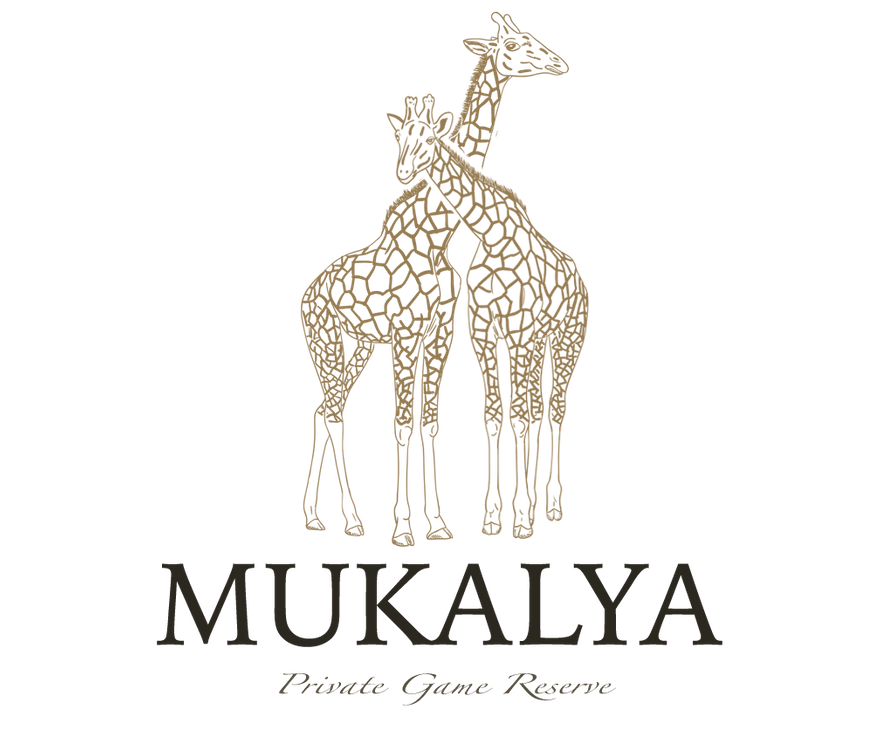 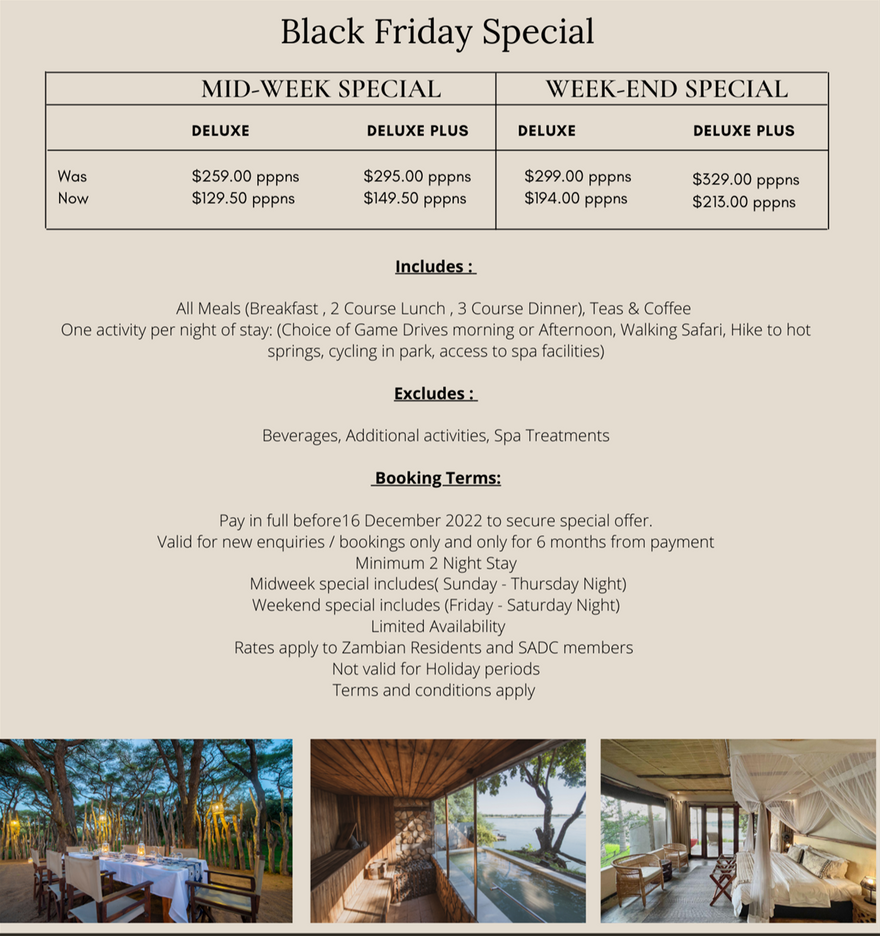 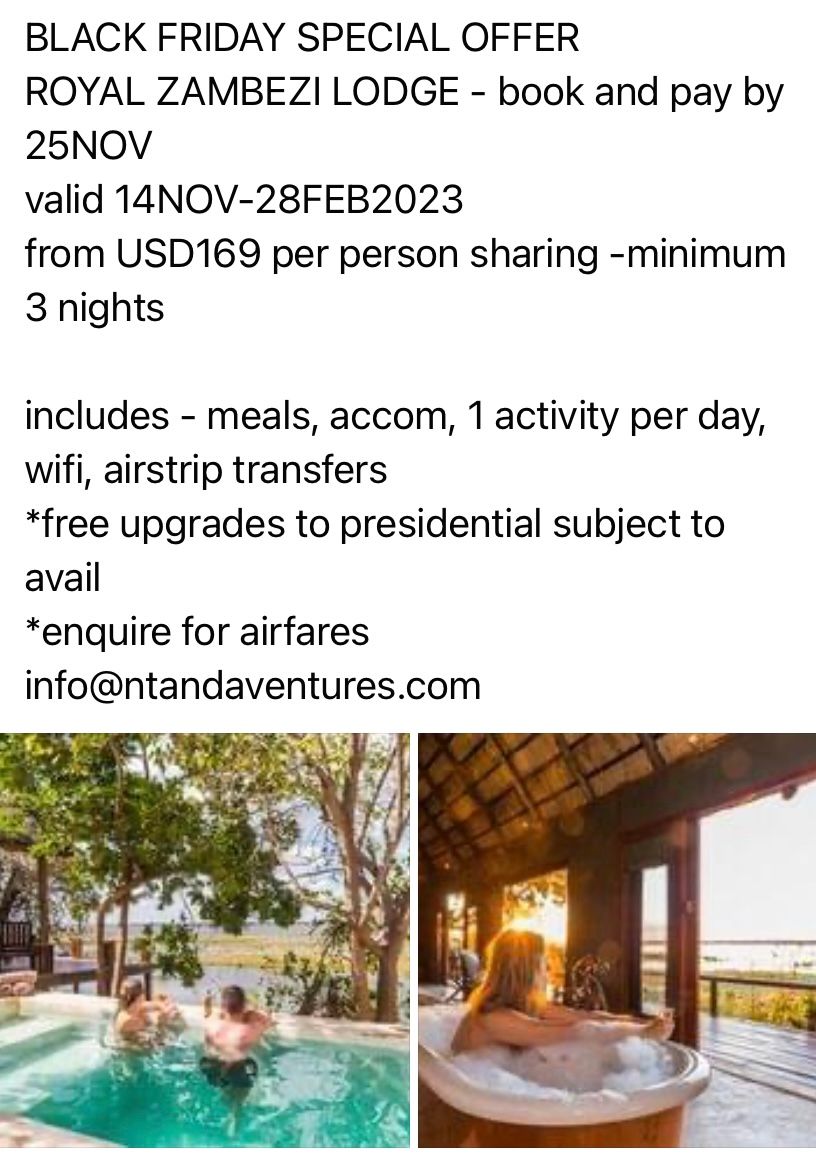 Spend 3 nights at either Nanzhila Lake or Plains Camp over the month of November and pay $495 per person sharing.

405 USD per person per night

New Years Eve has become a well-loved tradition at Chundukwa. Guests may look forward to a delicious sheep on the spit with all the sides and a selection of desserts, bubbles and cocktails flowing, easy music, lots of laughter and good conversation! A Vegan Menu is also available.

NYE Full Board Basis from only US$ 225.00 pppn/sharing (includes one in-house activity per person per night of stay and return transfers from Livingstone Airport.) Please contact us for full inclusions and exclusions. T's & C's Apply.

Includes: All meals, accommodation and one activity

Special offer 1 – Book 3 nights and get a 4th free

Includes all meals, accommodation and 1 activity per day.

Kids have a discounted rate. Infants under 6 years are foc!

This package includes 3 nights’ accommodation in either chalet rooms or luxury safari tents, all meals including a special 4 course Christmas lunch, Christmas carols on the 24th December with delicious snacks & drinks, 2 game drives per day and return airport transfers.

$195 per person per night sharing.

Games around the campfire with your guide

Spend the silly season far away from the madness and cillax in a serene bush setting!

Luxury accommodation in a Premier Room: 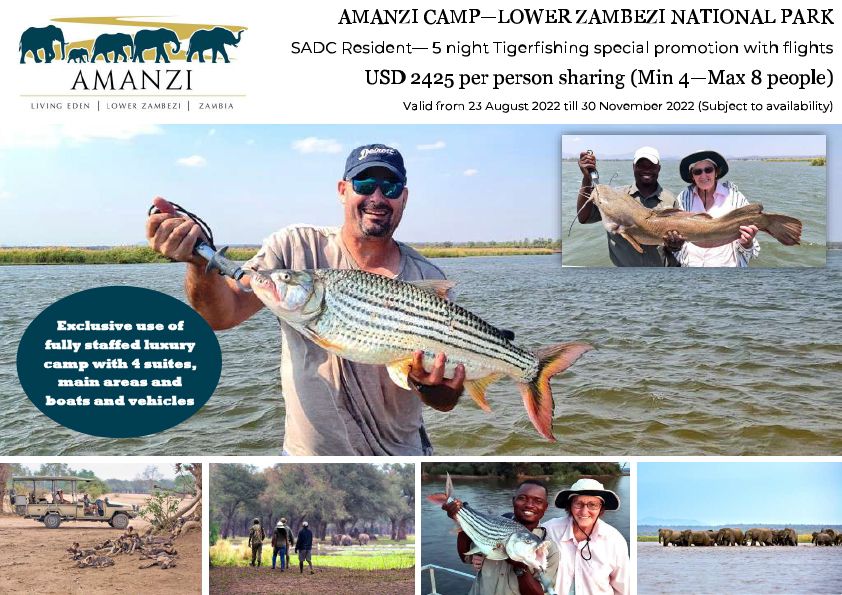 1 FREE ACTIVITY OVER & ABOVE the INCLUDED ONES

SINDABEZI - Get a free Breezer Trip to Livingstone Island. $195 PPPN

We regret, no children under the age of 12. Children between 12 - 17 years will be charged at 70% of adult sharing rate.

USD$20 pppd fee covers all aspects of park entry including game drives and fishing as applicable in the LZNP.

The fish are biting & the Carmines have arrived!!!!

Book 3 nights & get a complimentary pp

• Sunset cruise to see the carmines

Pick-up from the airport in Livingstone and transfer to lodge in the outskirts of town. In the late afternoon a visit to the Victoria Falls (optional, U$ 20 pp entrance fee). Overnight at Maramba River Lodge or similar. Dinner in a restaurant (own expense). (-/-/-)

Pick-up from your lodge and early morning drive to Mosi oa Tunya National Park where we do a game walk with a ranger to see the rhinos. Afterwards we carry on along the course of the Zambezi River up to the beautiful Ngonye Falls; not as mighty as the “big brother” further south, but equally impressive. The Zambezi splits into several channels and the masses of water find their way through the basalt rock formations. Camping near the river. (FB).

In the morning we will hike to an island to get the best view of the falls. Afterwards we drive further north to Mongu and cross the Barotse flood plains to the Liuwa Plains National Park. There are few roads; however, this is part of the park’s attraction: around 3660km² of untouched Africa. Most of this is a vast honey-coloured plain of grass, with just the occasional water pan, island of raffia palms or a small tree-belt interrupting the scenery. End of October tens of thousands of Gnu (about 45.000) as well as zebra and buffalo will join the more resident red lechwe and reedbuck. The open plains are particularly good for oribi. Hyenas are the main predators here, while wild dog, cheetah and lion are dispersed on the plains. Camping in the bush (running water, showers and flush toilets are present). (3x FB)

our stop-over at the edge of the Barotse floodplains. Here we have the possibility to stock up for the next few days in Kafue National Park. Camping on the shore of a beautiful lake. (FB).

We drive through Miombo forest to Chunga. Several small rivers cross this area. These leave a few waterholes in the dry season for the animals to quench their thirst. Wild dogs, which roam large areas of the park, cheetah and lion are among the inhabitants here. The birdlife is prolific. Camping on the banks of the Kafue River at Mayukuyuku Camp or Kasabushi Camp (2x FB)

We leave the wilderness and drive on a tar-road to Zambia’s capital Lusaka. Overnight in chalets at Pioneer camp or Wilddog Lodge. Dinner in a restaurant (own expense) (B/L/-).

En route to Chipata we drive through beautiful mountainous landscape and stop at Luangwa Bridge, a thriving market, where all kinds of baskets and mats as well as hand carved items are offered. Overnight in modern rooms in Protea Hotel (B/L/-)

In the morning we start our travel to Mfuwe and to our campsite outside the park border. South Luangwa NP is known for its abundance of African wildlife: Thorneycroft’s giraffe, Cookson’s Gnu, Crawshay’s Zebra and big herds of buffalo and elephant. Game drives along the Luangwa River often produce spectacular sightings. Hippo families can be seen in great numbers in the river, unparalleled in Africa. During the dry season (July to October), many side channels of the river dry up, leaving the fish trapped. This attracts many different species of predators, such as the African fish eagle, jackal, and hyena, to mention but a few. The colourful Carmine bee-eaters are often seen perching in front of their nests in the riverbanks. Camping in Croc Valley Camp, Marula Lodge or similar (4x FB).

Excludes: Visas if required | Travel insurance (compulsory ) | Gratuities | International flights to/from Lusaka from/to other countries where applicable | Fishing permits and fishing tackle. (Rods, reels and tackle can be hired or bring your own)

Visit the source of the Zambezi

VISIT THE SOURCE OF THE ZAMBEZI - Self Drive

*Chimfunshi is close to Monkey Cottage

FREE ACTIVITIES-Jump in your vehicle and explore the area - walk around top and bottom of Wina crater. Especially sunrise or sunset. Look for the resident bushbabies, pangolin, monitor lizards and the birds and buck. - Walking, hiking, cycling, birding bring your own equipment or hire guide/equipment on 15km of trails -game drive (on your own or book/pay) get close to the wildebeest -canoeing on the Lunga River (various options)enquire for price -Source of the Zambezi River -Zengamina mini-hydro power scheme -Historic Kalene Hill/ Mission hospital -Chibesha lake -Local waterfalls (numerous) -Stand on the Angolan border at Jimbe Bridge -Kasenseli Gold mine -Birding to the Chitunta plain- special birding area Meals can be ordered from Lunga View Lodge in town.